Mastering Galaxy Note8 S Pen with Tutorial Tips and Tricks - Let's learn how to use stylus pen on new S Pen Galaxy Note8 with our tutorial, tips and tricks from beginners to master using the S Pen Note8. 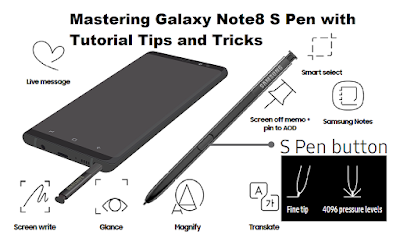 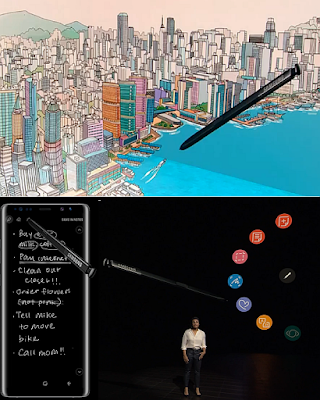 You can create fine or broad strokes just as you would with a brush. The S Pen has 4096 levels of pressure to more accurately respond to the touch of the pen tip, giving you control whether you're note-taking or sketching.

You can draw your own emojis, with a hand-drawn message make animated GIFs, or write handwritten messages on photos. Note8 live message allows you to express your feelings and send them to people you care about.

Create your own GIFs
Advertisement
When words aren't enough, you can say it with your own animated GIF on new Note8. Use the S Pen's Smart select feature to select a section of a video and share them with your friends or on social media. You can also select intricate shapes from images to share or paste where you need them.

Capture every brilliant idea by popping out the S Pen to write them down. You don't even have to wake up your Galaxy Note 8. From bullet journaling to serious artwork and everything in between, Samsung Notes gives you the tools. Use the wide selection of brushes, pens, and colors to draw up plans and create your own masterpieces. When you're done, pin it to the AOD (Always On Display) to keep it handy, or save it directly too.

Effortlessly save those long articles, emails, and documents as one image, and then add markups just as easily. You can learn how to use S Pen on Galaxy Note, how to create notes using the S Pen with pen tip on the Galaxy Note8 display which is off

How to Remove S Pen from Galaxy Note8

The S Pen stores inside your Samsung Note8 for convenient access follow this tutorial:
1. Push the S Pen inward and release it.
2. Slide the S Pen out the rest of the way using the notch on the end of the S Pen.

Hover the S Pen over the screen to preview content or view information about an item on the screen. The following Galaxy Note8 S Pen Tutorial Air view features are available:
• Preview an email message before opening it.
• Preview the contents of a photo album or enlarge a picture.
• Preview a video and navigate to a specific scene by hovering over the timeline.
• View the name or description of an icon or a button.
Note: The preview function is only available when the S Pen’s on‑screen pointer is a solid color.

When entering text, you can open a Handwriting window that allows you to write with the S Pen.

To launch the Air command menu:
1. Tap Air command.
– or –
Hold the S Pen near the screen so that the pointer appears, and then press the S Pen button once.
2. Tap an option: 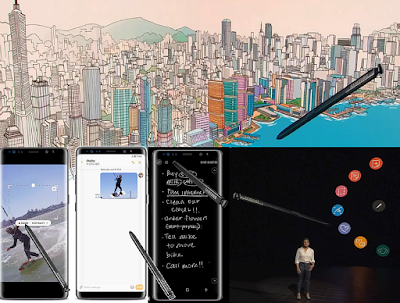 You can create notes using the Samsung Notes app.
1. From a Home screen, swipe up to access Apps.
2. Tap Samsung folder > Samsung Notes.
3. Tap Create and type a note. Available options include:
4. Tap Save when finished.

You can make edits to notes you create.
1. From a Home screen, swipe up to access Apps.
2. Tap Samsung folder > Samsung Notes.
3. Tap a note to view it.
4. Tap the content and make edits.
5. When you are finished, tap Save.

You can browse notes you create.
1. From a Home screen, swipe up to access Apps.
2. Tap Samsung folder > Samsung Notes.
• Browse note entries by swiping up or down.
• To search for a note, tap Search.

You can edit, share, or manage notes.
1. From a Home screen, swipe up to access Apps.
2. Tap Samsung folder > Samsung Notes.
3. While browsing notes, tap More options for the following options:
• Edit: Select notes to share, delete, or move.
• Sort by: Change the way notes are organized.
• List/Grid view: Switch between List view and Grid view.
• Trash: View notes that have been deleted. You can restore notes or empty the trash.
• Settings: View settings for the Samsung Notes app.

Launch the Samsung Notes app and view a listing of the notes you have created.
Tap Air command > View all notes.

Smart Select
The Smart select feature provides a capture tool to collect content on a screen. You can then add it to your Gallery app or share it with your contacts.

To launch the Smart select tool:
1. Tap Air command > Smart select.
2. Tap a shape at the top of the screen, and then drag a box with the S Pen to select content. The following options appear:
3. Tap Save. The content is saved to the Gallery app.

Screen Write
Screen write allows you to capture screenshots and write or draw on them.

To use Screen Write:
1. Tap Air command > Screen write.
2. The current screen is captured, and a pen tool appears. The following editing tools are provided:
3. Tap Save. The content is saved to the Gallery app.

To launch Live message tool:
1. Tap Air command > Live message.
2. Draw an image or write a message. Your strokes will be recorded to create an animation.

Hover over words with the S Pen to translate them and listen to their pronunciation.

To access Translate:
1. Tap Air command > Translate.
2. Tap the source and target languages to change them to the desired languages.
3. Hover the S Pen over a word.
• Tap Sound to hear the word pronounced in the source language.
4. Tap Close to close Translate.

Use Bixby Vision to search for products online, discover new places nearby, translate text, and more. Learn more how to use Bixby Vision.

You can customize the Air command menu by adding shortcuts to apps and functions.

To use Add shortcuts:
1. Tap Air command > Add shortcuts.
2. Tap the apps or functions you would like to add to the Air command menu.
• To remove an app shortcut, tap Remove.
3. Tap Back to save your selection

The S Pen has its pen tip on the Galaxy Note8 display. Follow this tips to maintain the S Pen Note8 water-resistant and dust‑resistant features of your device, make sure that the S Pen slot and opening are both maintained free of dust and water, and the pen is securely inserted prior to any exposure to liquids.

You can replace replace the S Pen tip on Galaxy Note8 with the included kit.
To replace the tip: 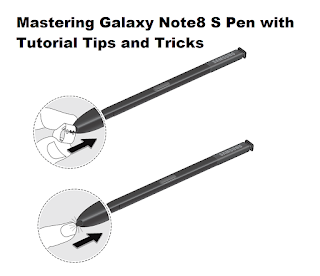 1. Use tweezers to pull out the S Pen tip.
2. Insert the new pen tip and press until it clicks in place.
Advertisement